Once transformed, the disused factory will house 35 loft-style apartments 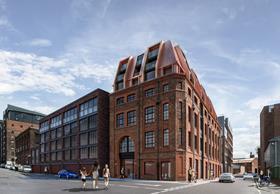 A disused factory in Liverpool is to be converted into an apartment block after council planners gave the scheme the go-ahead.

The building (pictured) on Bridgewater Street in the Baltic district of the city is being developed by Eloquent Global into 35 flats.

The conversion, designed by Liverpool-based Studio RBA, is expected to start next spring and will see the existing building house the new apartments, along with a new bronze-clad three storey roof extension.

The £7m development will contain a mix of apartments ranging from studios to four-bedroom units.

Adam Morgan, Studio RBA director, said the conversion would “help strengthen the character of the burgeoning Baltic District, with the design for the existing building being complementary to its surroundings”.

No start date has been given for the scheme.