Government measures will give developers new brownfield permissions, but fail to address lack of resources or redesignation of greenbelt land 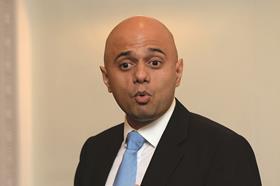 The industry has questioned the impact of government plans to speed up planning for new housebuilding, with fears that the capacity of the industry is now the major constraint to housing supply.

The measures, launched by chancellor George Osborne and business secretary Sajid Javid (pictured) last Friday, will give developers “automatic permission” to build on previously used sites, and the government the power to impose a plan for housing on councils that have failed to create one.

The changes were published as part of a far-reaching plan to increase UK productivity called Fixing the foundations. It unveiled a move to a “zonal” planning system for brownfield land, allowing sites included on the government’s proposed register of brownfield land automatic “permission in principle” to be developed. Compulsory purchase powers will also be beefed up, with further proposals on exactly how this is done to be brought forward in the autumn.

Among a wide range of reforms, the plan said the government would take action to streamline the time taken to create local plans, but that “the secretary of state for communities and local government will intervene for those local authorities that do not produce them, to arrange for local plans to be written.”

The moves have been warmly welcomed by housebuilders, with HBF executive chairman Stewart Baseley saying: “We need more land to come through the system more quickly if the industry is to increase supply closer to the level needed.”

However, a number of experts have voiced fears the moves will have little impact on supply, with the industry’s lack of construction capacity currently seen by many housebuilders as the limiting factor on how many homes they are able to build in the current market, rather than planning permissions.

Recent data shows that planning permissions are currently being granted at the fastest rate since 2008, with over 195,000 permissions granted in 2014, a rise of 23% on the previous year.

Justin Gaze, Knight Frank’s joint head of residential development, said the proposed changes were a step in the right direction, but that they failed to address the “fundamental issue of development capacity” and the cost of materials. “From bricklayers to site managers, the lack of skilled construction workers and professionals in Britain is one of the largest factors that continues to constrain the supply of new homes,” he said. “Until this is addressed, it is unlikely we will see a marked change to development volumes.”

Roberta Blackman-Woods, Labour shadow housing and planning minister,
said moves to improve skills and expand the capacity of the housebuilding sector were needed. “Developers tell us these are major barriers to housebuilding, and yet measures to address this are notably lacking from the government’s report,” she said.

In areas where the volume of permissions is lacking, experts say the lack of resources given to local authority planning departments is seen as the biggest constraint on addressing this. A survey of housebuilders by property consultancy Knight Frank in April found that boosting resources for local authority planning departments was the best way for boosting housebuilding numbers, with 82% calling for it. There is nothing in the Productivity Plan to address this. Funding for local authorities was cut by 40% between 2010 and 2015, with further cuts scheduled.

Nick Parkinson, design director at housebuilder Hill, said: “The government needs to ensure that local planning departments have the resources and staff available to deal with planning applications quickly.”

Development industry critics also bemoaned the lack of any measures to look at redesignating greenbelt land as fit for development, with the RICS recently estimating that brownfield sites could only deliver 200,000 homes, or one year’s supply of housing. Andrew Jones, practice leader of design, planning and economics at consultant Aecom said this was a “fundamental issue.” He said: “Avoiding a targeted review of green belts or identifying locations for new communities shows a lack of joined-up thinking. Government or city region mayors will urgently need to tackle this in the future planning and growth of our cities.”

Duncan Field, head of planning at law firm Norton Rose Fulbright said this issue was “the elephant in the room”. “There are a number of commuter hubs in green belt which could accommodate significant growth. This has to form part of future housing delivery,” he said. 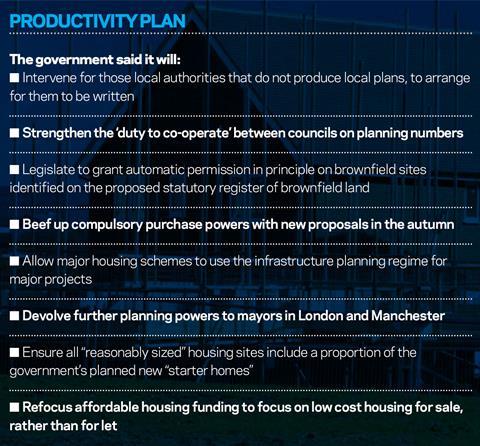