Liverpool city council has submitted plans for two sound studios on a site next to the city’s famous Littlewoods Pools Building.

The two 20,000sq ft studios are part of a £54m plan by developer Capital & Centric to transform the art deco building, built in 1938 and used to manufacture parts for Halifax bomber planes during World War Two, into a film and TV production hub. 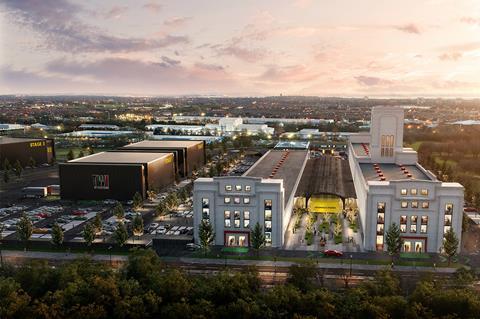 A contractor will be appointed to the project next month with work starting as soon as November and completed by next spring, according to the council.

Capital & Centric say the wider ShedKM-designed project, Littlewoods Studios, could become a “Hollywood of the North”.

The vacant Littlewoods Pool building was hit by a major fire in 2018.

Liverpool mayor Joe Anderson said: “Liverpool’s reputation in the TV and Film industry is second to none. The city’s ability to double up as New York, Chicago or Moscow means we regularly see it on the silver and small screen.

“The demand from production companies to come here has now reached a tipping point and we need to take the city’s offer to the next level.”

Contractors are already chasing a £21.5m deal put out to tender last week to build a pair of sound stages for an existing film studio in Belfast.

The job would see the two sound stages, providing a combined 157,000ft2 of production space, built along with a three-storey office block and two workshop blocks on a waterfront site in the Northern Irish capital.