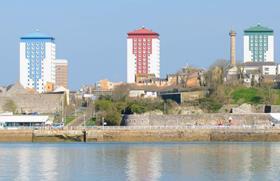 A Plymouth housing association has appointed a contractor to replace combustible cladding on three of its towers.

Plymouth Community Homes (PCH) appointed the contractor via a negotiated procedure without prior publication due to the “extreme urgency”.

Following last June's Grenfell tower fire in west London, PCH commissioned a review of the buildings, which identified the panels "as being of a combustible nature and unsafe from a fire engineering perspective, placing the occupants at an immediate and significant risk in the event of a fire breaking out".

Mi-Space, which is a subsidiary of the Midas Group, is being paid between £7.7m and £8.2m to carry out the works.

Housing associations are eligible to apply for funding from the goverrnment’s £400m fund to help replace combustible cladding on social housing.

In May, it was revealed this funding had been taken from existing affordable housing programmes.