Update: London Fire Brigade has checked building and confirmed it is not in danger of collapsing

The Metropolitan Police have confirmed there have been fatalities so far following a huge fire at Grenfell Tower in west London.

The fire at the 27-storey tower block on the Lancaster West Estate in north Kensington began shortly after midnight this morning with the Fire Brigade receiving its first call to the incident at 00:54am. A major incident was declared.

The London Fire Brigade said the fire was between the 2nd and 27th floors at the 1970s building. Forty fire engines over 200 firefighters and over 100 medics attended.

The London Fire Brigade have also confirmed that the tower is not in danger of collapsing after its specialist urban search and rescue crews and a structural engineer checked the building. 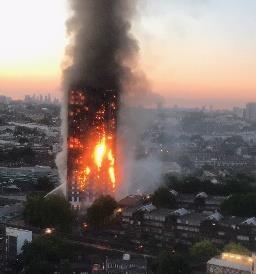 The tower had received a £10m refurbishment, including new windows and cladding, a new efficient communal heating system and bespoke smoke extract and ventilation system were fitted, completed last year.

The works, carried out by contractor Rydon and overseen by architecture practice Studio E, also included extensive remodelling of the bottom four floors, which created nine additional new homes and improved spaces for two local businesses. Harley Facades completed the installation of the new cladding in September 2016 according to a post on the firm’s facebook page.

The building is managed by Kensington and Chelsea Tenant Management Organisation (KCTMO) on behalf of the council.

London Fire Commissioner Dany Cotton said in a statement: “The cause of the fire is not known at this stage, and clearly we will be here all day and will be providing further updates, working with the police and ambulance service.”