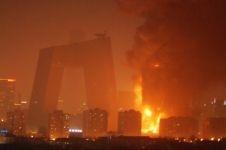 The head of construction at Beijing's CCTV tower has been arrested as part of the government's inquiries into the fire that gutted a signature Rem Koolhaas tower.

Police have detained 12 people, including project boss Xu Wei, three colleagues and eight workers at the firm that reportedly staged an illegal fireworks display for the broadcaster, according to state press.

Sparks from the display, put on to celebrate the Chinese Lantern Festival, have been blamed for igniting the fire that destroyed much of the 40-storey TVCC tower on Monday. The broadcaster has publicly apologised for the event.

One firefighter was killed a further six were injured in the blaze at the building that was due to open in mid-May and contained a theatre, several studios and one of the city's smartest hotels.