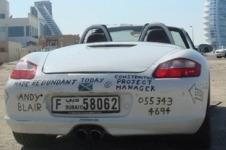 The world's biggest Porsche shop, in Dubai (where else?), has had its best ever sales in December despite the downturn.

The dealership sold 50% more cars in the final month of 2008 than for the same period the previous year. Sales for the full year were up 28%, Porsche Centre Dubai announced today.

Porsches in Dubai gained notoriety in recent weeks after construction manager Andy Blair was made redundant by consultant Turner & Townsend and wrote an advert for services directly on his sports car, attracting world media attention.

Building revealed last week that using a Porsche as a billboard seems to work, because two weeks after his stunt Blair landed a new job with Dubai-based leisure and hospitality consultant Thomas Klein International.

Porsche Centre Dubai was unable to confirm whether its increased sales were linked to the spate of redundancies in the construction industry.

Is this why Porsche sales are up in the emirate?