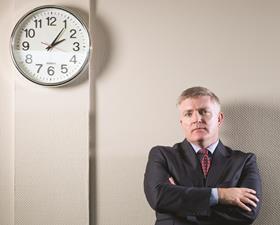 Housing minister Mark Prisk has said the government will offer a “something for something” deal to social landlords who receive government grant to help build new affordable homes after 2015.

Speaking at the annual Chartered Institute of Housing conference in Manchester, Prisk said that housing associations would be asked to look “rigorously” at whether to sell or re-let vacant homes at higher rents in return for government grant.

The speech followed the government laying out details of a new funding settlement for social housing, which may see grant rates for developers of affordable housing cut by up to a tenth. Treasury secretary Danny Alexander set out government plans to spend £3.3bn on building 165,000 affordable homes over the three years between 2015/16 and 2017/18.

Prisk said: “Given all this money and commitment there will of course be high expectations on registered providers on efficiency of delivery with public money.

“In considering bids associations will have to maximise their plans for their own contributions and maximise the cross-subsidy they can generate from their existing stock.

“We will be having a conversation with providers about them looking rigorously at whether every re-let should be on an Affordable Rent basis [which is higher than traditional social rents].

“My feeling is that this will drive a significant change in the number of homes that are converted to affordable rent or sold when they become vacant.”

Prisk said the scheme represented a faster rate of building of affordable homes than had been achieved in the previous 20 years.

However, Chartered Institute of Housing chief executive Grainia Long described the package as modest. “In the final analysis affordable housing received £3.3bn out of a £100bn investment package - and this is modest,” she said.

“It is not the ‘game changer’ required to make a significant impact to alleviate our housing crisis.”

The investment represents a marginal fall from the current 2011-15 affordable housing programme, which is worth £4.5bn over four years, but has been welcomed in some areas given speculation that grant funding for housing might be cut entirely.

However, there has already been speculation under the current system that housing associations will reduce or stop their development programmes in response to falling grant rates.

Under the programme announced today, capital funding for housing will reduce to £957m per year, which at face value would leave an average grant of £17,400 per property in the three year programme from 2015/16 to 2017/8.

However, the final grant rate figure will not be known until the value of Right-to-Buy receipts are realised.

Prisk also laid out the government’s plans, announced earlier in the day by Danny Alexander, to boost the private rented sector, the release of public sector land, and home ownership.

He said there would be a further bidding round or the Build to Rent fund in September, which is designed to deliver 10,000 homes for market rent and which the government says has been oversubscribed.

The package of measures also included:

£160m of funding in 2015-16 for Decent Homes, targeted on areas with the largest number of non-decent homes £102m of loan and equity finance in 2015-16 to meet upfront infrastructure requirements that will enable housing projects to proceed

The sale of £5bn of public land and property over the next parliament, with the sale of land centralised in the Homes and Communities Agency