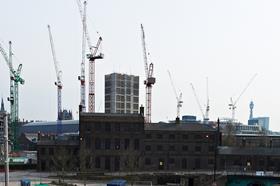 Construction bosses have reported a fall in profit margins in the third quarter of 2013, despite a rise in activity.

They said this was largely due to rising costs. While a balance of 4% of firms said tender prices were going up, 49% of building contractors reported a rise in labour and material costs.

However, 43%, on balance, reported a rise in activity – the second highest balance reporting growth since 2007.

Noble Francis, economics director at the Construction Products Association, said it was “encouraging” to see continuing recovery of the market in both Q2 and Q3 of 2013.

He added: “Although private housing is clearly driving industry growth, all construction sectors enjoyed increases in output. With rises in new orders and enquiries, the industry clearly expects that the recovery in output will continue over the next 12 months.”

Julia Evans, chief executive of the National Federation of Builders, said: “Confidence is returning to the industry and we are seeing measurable signs of growth and a healthy number of orders. However, the cost of doing business continues to rise as materials and labour cost increases far outpace revenues.”

She said a fall in repair and maintenance work reported in the survey “could be taken as evidence that the Green Deal is not yet taking hold”.

Stephen Ratcliffe, director of UKCG, said: “These results are more encouraging signs of a turn round in the construction. Housing, as the leading indicator, is still the main growth driver and general construction still has some catching up to do. Nevertheless, the mood music amongst UKCG members is more positive than it has been for some time.”