Brexit vote and taking on more staff blamed for slump 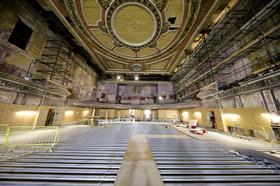 The architect carrying out work on a £27m makeover of Alexandra Palace in north London has said profit slipped last year as workloads were hit by the result of last year’s referendum on the EU.

Feilden Clegg Bradley Studios, whose work at Ally Pally includes restoring a Victorian thatre (pictured), said revenue remained at a record £17.2m but added that expanding its London premises in Fitzrovia, taking on more staff as well as a slowdown in work following the Brexit vote all took their toll on profit which slumped more than a third to £2.2m.

But in a note accompanying its accounts for the year to March 2017, the firm said: “We are very optimistic about the strength of our future workload including international work.”

Work from outside the UK broke through the £1m barrier last year, increasing by more than 40% on the £770,000 of business it racked up overseas last time.

The Stirling Prize winning practice, which won the award back in 2008, is carrying out work to refurbish the Southbank Centre, the arts complex which includes the Hayward Gallery, on the banks of the river Thames in London.

The number of staff employed by the business went up close to 10% to 175 while the salary of the highest-paid employee, who is not named, was just under £178,000.