First packages of work out next month 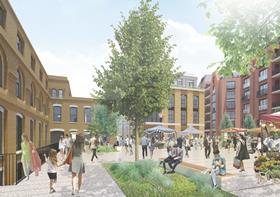 Project manager GVA Second London Wall has been appointed to the £1.25bn redevelopment of Stag Brewery in London’s south west.

The project, which has been designed by Squire & Partners and is being developed by Reselton Properties, is being considered for planning approval by Richmond council.

Second London Wall’s will initially involve tendering the pre-demolition soft strip of the old brewery buildings and preparation of utility diversions to enable demolition once planning consent is secured.

Wes Bradford, senior director at Second London Wall, said: “We are delighted to have been appointed by Reselton on this complex project and are now busy preparing the demolition tender package for the initial site works which will be issued to the market next month.”

The mixed-use development will include 667 homes, office space, high street shops and a new secondary school with leisure facilities.

• A traditional commercial high street feel for the benefit of the surrounding Mortlake community that includes 20 units for shops, bars, restaurants, a gym, together with a hotel, cinema and rowing club

• A new secondary school for 1,200 pupils together with a full-sized football pitch, as well as indoor multi-use gym, play and sports space

• The scheme also proposes a care village, containing up to 150 assisted living units and an additional care home with dementia care