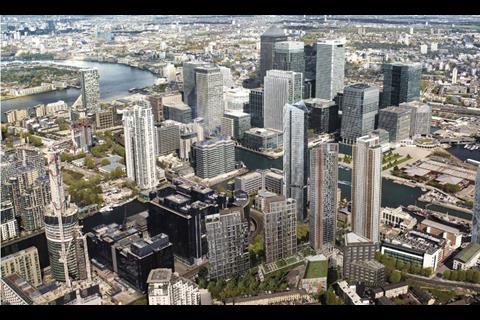 The updated designs for Make Architects' 225 Marsh Wall, seen in context from the south-east 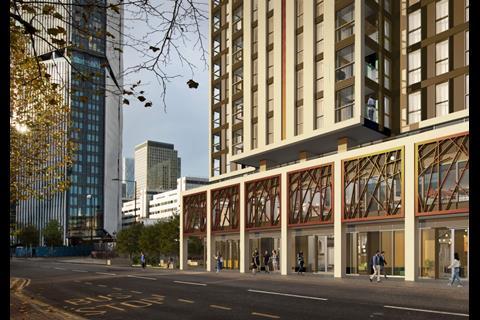 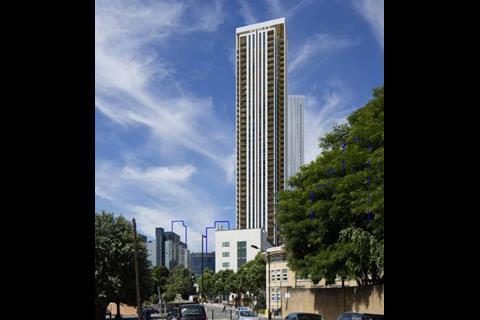 The 56-storey version of 225 Marsh Wall, originally by Make Architects 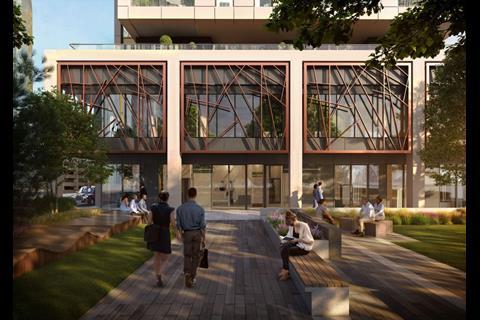 East London councillors are being urged to reject proposals to increase the height of an under-construction Isle of Dogs skyscraper by seven floors and take its total height to 56 storeys.

A report to tonight’s meeting of Tower Hamlets Council’s strategic development committee recommends refusal for the proposal to boost the height of the Make Architects-designed 225 Marsh Wall by 22m.

It is the latest in a series of barriers placed in front of the development, on the site of a former business centre to the south of Canary Wharf.

Tower Hamlets councillors originally rejected Make’s proposals for a 49-storey residential tower on the site in 2017 – despite the practice reducing the structure’s planned height from 56 storeys in a bid to secure local authority backing. Developer Cubitt Property Holdings won consent for the shortened scheme at appeal the following year.

That 332-home consent is currently under construction on the site but new developer Chalegrove Properties is seeking a seven-storey extension to the scheme under a reworking produced by Design Delivery Unit. It would provide an additional 58 homes and also proposes reconfigurations of the building’s main entrances and changes to its façades.

But a report from council officers says they consider the height of the updated proposals to be “detrimental to the townscape and the Canary Wharf skyline”, which their report describes as of “strategic importance”.

“The proposal does not respond to the context and fails to deliver on the objectives and principles for managing tall buildings and their effect on local context and views as set out in the local plan,” they said.

The report suggests that Chalegrove and DDU have addressed cycle parking concerns but not waste-management issues although officers conceded that the impact was “not considered to be significant”.

Officers concluded: “The planning balance exercise has not identified significant public benefits which would outweigh the harm caused to the townscape and skyline of strategic importance, as well as the proposal’s failure to meet other development plan policies relating to the design of tall buildings. On this basis, officers recommend the refusal of planning permission.”

Documents submitted to the council by the project team argue that the 56-storey version of 225 Marsh Wall is in line with Make Architects’ neighbouring 53-storey The Madison building – which is actually 2m taller than the proposed scheme, and Farrells’ 49-storey Project Skyline to the south.