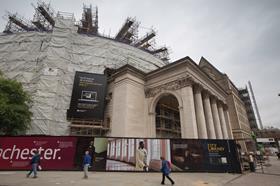 The government Construction Strategy is still failing to have a significant impact in the wider public sector two years after its launch, according to a survey of more than 300 construction clients conducted by Building.

The survey, which included 120 respondents from central government and the wider public sector, found that the number who have in place a strategy to reduce construction costs by 15-20% over the life of the current parliament – a key objective of the Construction Strategy - has actually fallen slightly in the last year. The number declined from 30.7% in 2012 to 29.9% this year.

Of those responding, just 4.6% said they had changed procurement significantly.

The Construction Strategy, drafted by then chief construction adviser Paul Morrell and launched by Cabinet Office minister Francis Maude in May 2011, was designed to reform public sector procurement of construction.

Since then seven of the biggest-spending government departments have signed up, including the Department for Education and the Department for Communities and Local Government, but this survey seems to show the strategy is failing to be endorsed by the wider public sector, including local authorities.

The survey also found the public sector is continuing to struggle to catch up with the private sector in terms of adopting the more forward-thinking relationships with its suppliers recommended under the strategy. Just one in 10 public sector clients use project bank accounts, compared with 23.5% of private clients.

Graham Watts, chief executive of the Construction Industry Council, said there was “no excuse” for any part of government not to be formulating plans to cut costs.

Stephen Ratcliffe, director of the UK Contractors Group, said: “Maybe government needs to do a bit more in demonstrating some of the successful cases to encourage people to take it more seriously.”

A Cabinet Office spokesperson said: “Our government Construction Strategy is ambitious in its plans to reform the construction industry and make it faster, more efficient, and more innovative.

“And we’re showing it’s possible to strip out waste and deliver value in public sector construction - just this week, we announced £10bn of savings for the taxpayer from across government in 2012/13, of which £447m were savings delivered through our Construction Strategy.

“This should itself encourage others across the wider public sector to take up the best practice benchmarks that our strategy sets out.”

Construction clients are holding off investing in sustainable construction projects because of a lack of leadership from the government on the climate change agenda, a survey by Building has found.

The survey of over 300 clients, from the public and private sector, found that 62% of them would change how or whether they invested in their built assets if the government “gave a clearer and more consistent message that it will prioritise policy changes that aim to tackle the threat of damaging climate change”. The survey found that a majority of both public and private clients want the government to more clearly prioritise policies designed to tackle climate change.

The findings come as a key amendment to the Energy Bill, that would have set a decarbonisation target for UK electricity, was defeated in parliament this week. The amendment was seen as a means to boost investment in green energy.