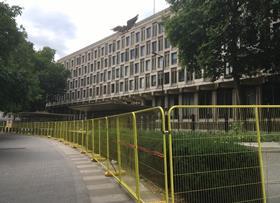 Some initial work at the US embassy site has now begun

A main contractor to carry out Qatari Diar’s conversion of the former US embassy in London is set to be appointed by early next year, according to one of its bosses.

The firm’s chief development officer Jerry Holmes said the developer has started a “soft market engagement” in its hunt to find a main contractor to work on the David Chipperfield-designed conversion of the building.

Careys has already begun the soft-strip work on the grade II listed building and Holmes said a main contractor would be appointed “late this year or early next year”.

Last June Building revealed a list of eight big name firms including Laing O’Rourke, Sir Robert McAlpine and Multiplex who had all been contacted about the high-profile contract to turn the Mayfair property into a luxury hotel.

Others believed to be looking at the job include Mace, Skanska, Balfour Beatty, Kier and Lendlease.

No official value has been put on the work but one source said: “It will be north of £200m.”

The scheme hit the headlines last year after US president Donald Trump complained that the US government under his predecessor Barack Obama had sold the site to the Qataris for “peanuts”.

The last of the embassy’s staff moved out of its historic Grosvenor Square address (pictured) back in January 2018 into its new building, constructed by McAlpine, at Nine Elms in Vauxhall.

The news comes as Multiplex this week started work on phase four of the developer’s Chelsea Barracks scheme.

It had been due to begin the Eric Parry-designed phase of the scheme last year but Qatari Diar pulled the contract days before work was meant to start.

Qatari Diar’s chief sales and marketing officer Richard Oakes said the developer had stopped the main package of works as it had been set to start at a “difficult time” in the UK market.

Oakes said: “There was a lot of uncertainty in the UK market at that time. Carillion had just gone bust and there are so few contractors in the UK that can take on this type of project that we decided to act responsibly and just take a pause.”

Work on stage four of the scheme, which has a £250m-£300m pricetag, is due to be finished by 2022 and will provide 97 apartments and amenities including a spa, tennis courts and a wellness centre.

Keltbray has been carrying out groundworks on the west London site.