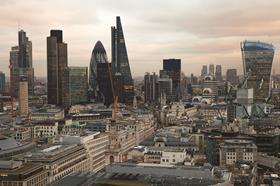 While there is little by way of consensus on tender price forecasts among QSs due to Brexit uncertainty, the general view is that inflation will slow in 2017 before bottoming out next year.

Paul Connelly, managing director for UK cost management at Turner & Townsend, said: “Over the last year, wages have been the driver for keeping inflation up as part of contractors key input costs, but tier two contractors are reporting that imported materials and the weakness of sterling are likely to have a bigger impact over this year”.

The industry has remained busy since the EU referendum, Core Five partner James Clark added, but he cautioned not enough big investment decisions have been made. “I guess there’s going to come a point when all of the readying of sites and preconstruction work will be finished and somebody needs to say ‘right, let’s go’,” he said.

Arcadis’ market intelligence lead Will Waller said there could be “an intensification of the uncertainty” before the terms of Brexit become clearer. He added: “The first six months of [political] negotiations are going to be critical.”

Mark Lacey, partner at Alinea, commented: “It’s all about to what extent the pipeline of work continues to flow through and how market sentiment gets impacted by Article 50 being triggered.”

There is a “nervousness”, Alastair Hamilton, partner at Pick Everard, admitted, but he added: “We are seeing developers becoming more active, particularly on residential schemes across the regions and we’re seeing a lot of enquiries on schemes around transport hubs.”

Pick Everard is looking to capitalise on regional growth with a new office in Bristol opened this month, following the opening of a Birmingham office last summer.

Gleeds’ head of research and development Sarah Davidson agreed the regions and in particular Birmingham look buoyant, but at the same time warned big infrastructure projects like HS2 take time to come on stream. “There’s not a ‘wham-bam’ release of the work,” she said.

Meanwhile, contractor pipelines are considered to be healthy through to the middle of the year, but heading into 2018 workloads are looking more uncertain.

“We are seeing them chasing harder than they have been for the last couple of years and they are putting more effort into that and are more amenable to doing work on spec which they wouldn’t have done 12 months ago,” Rider Levett Bucknall partner Russell Lloyd said.

He added that with increasing materials inflation on top of labour wage pressures this year he expects contractors will look to squeeze margins to bridge the gap between the market and the costs they are facing.

This concern over future pipelines and the impact of Brexit leads Lacey to highlight Alinea’s concerns that contractors’ coffers have not improved enough to insulate them against damage to workloads. “The industry is still recovering from legacy projects from the previous recession and contractors haven’t had a chance to build up significant cash war chests as yet,” he said.

However, it is generally agreed that contractors have learnt the lessons of the recession. “Rather than push themselves to the brink, they [contractors] will be quicker to consolidate, whether that be headcount reductions or consideration of overheads. I think we’ll see some prudent housekeeping/husbandry in the contracting market first before we see anybody going under,” CoreFive’s Clark said.

Connelly adds: “Life’s a lot more unpredictable these days. It feels to me there’s always going to be bumps in the roads going forwards and I think you’ve got to expect little shocks to the system where you might get a cooling off for a short period of time and then another burst of energy.

“That is just really hard to manage as a client and as a supplier.”