The total number of tall building completions is at an all time high, with more cities than ever finishing 200m-plus skyscrapers this year, according to the Council on Tall Buildings and Urban Habitat (CTBUH).

A decade ago, only 20 cities across the globe completed 200m-plus buildings – the highest number on record at the time.

This year, that number more than tripled to 69, with a record 28 cities and eight countries completing their tallest building in 2016. Thirteen cities completed their first 200m-plus high-rise building.

Anthony Wood, CTBUH executive director, said: “The data from 2017 shows a continuation of the trend towards a greater global proliferation of skyscraper construction. High-rise construction is no longer confined to a select few financial and business centres, but rather is becoming the accepted global model for densification as more than one million people on our planet urbanize each week.”

China completed a majority of the 200m-plus buildings in 2017, with 76 completions – or 53% of the global total. The US had the second-greatest number of completions, with 10 buildings finished in 2017.

The city with the most skyscraper completions was Shenzhen – where 12 buildings or 8.3% of the year’s global total were finished – with the entire top 10 of the world’s tallest buildings made up of towers in the city which links Hong Kong with China’s mainland in the south-east

The tallest building completed last year was the 599.1m high Ping An Finance Centre, designed by KPF. Among the UK consultants who worked on the scheme, now the fourth tallest in the workd and which runs across 115 floors and includes 80 lifts, were consultants Rider Levett Bucknall and Arup.

There are currently six 200m-plus buildings in the UK, including Renzo Piano’s Shard next door to London Bridge and Rogers Stirk Harbour & Partners’ Leadenhall Building in the City. 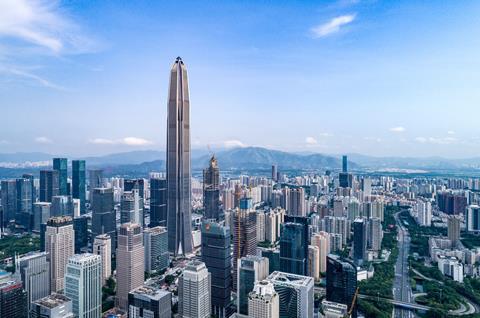 The Pin An Finance Centre was designed by KPF and comes in at 599.1m