The developer is proposing to build up to 2,000 apartments on the Trinity Islands site in four new towers designed by local practice SimpsonHaugh.

The towers range from 39 to 60 storeys and will provide a range of one, two and three bedroom homes. 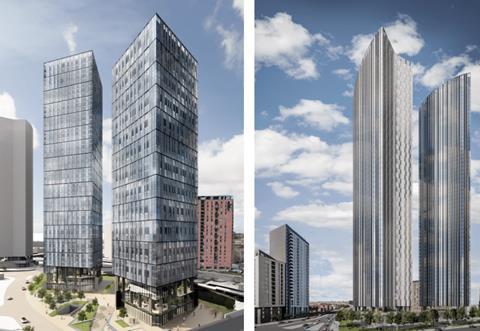 The development plans, in the Water Street and St Johns Strategic Regeneration Framework Area, are part of a wider drive for regeneration on land alongside the River Irwell in the west of the city centre.

Renaker purchased the 4.4 acre-site from developer Allied London in 2018. The scheme will feature two pairs of tower blocks divided by the inner ring road.

The developer has given people until 26 August to comment on the proposals. A planning application will then be submitted in the autumn.

Established in 2006, Renaker has around 2,900 homes currently under construction. It focuses on high-rise developments in and around Manchester city centre and is behind several schemes including the four-tower Deansgate Square development.