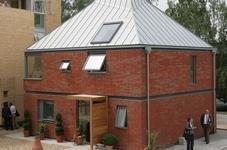 An extra £3.2m of funding has been made available to boost research into low energy homes.

Housing minister John Healey pledged the money, which will be used by a consortium including Barratt Developments, Crest Nicholson, Stewart Milne, H+H Celcon, Oxford Brookes University and BRE to build demonstration homes to level four of the Code for Sustainable Homes using energy efficiency measures alone, without the use of on-site renewables.

He made the announcement yesterday at the Making Sustainable Development Happen conference, organised by UKGBC/Building,

These homes will be built and sold alongside existing homes, to test how the homes will perform. The results will be used to support the way zero carbon homes of the future are built.

Healey also announced a government retrofit consortium that is intended to drive innovation, reduce costs and mainstream the retrofit market.

The aim is to bring together large scale organisations in both the public and private sectors to set a clear direction and provide greater certainty to a sector that has to date been slow to get off the ground. The membership is currently being confirmed.