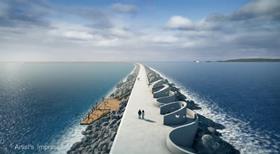 A £1bn tidal lagoon project in Swansea has been put under threat after the government launched a review of tidal power.

Building has learned a final decision on the project’s strike price will not be taken until the government review concludes - and this might not happen until autumn.

But the client body behind the project, Tidal Lagoon Power, has warned a decision on the project’s strike price needs to be taken within six weeks if the project is to go ahead. Discussions are “ongoing” over a strike price, according to the Department for Energy and Climate Change (DECC).

When negotiations started a year ago, Tidal Lagoon Power was looking for a strike price of £168 per megawatt hour (MWh) for its first lagoon, which would fall to £130/MWh and £92/MWh for Lagoons 2 and 3 respectively, with an average strike price of £111/MWh.

In response, a spokeswoman for Tidal Lagoon Power referred Building to the statement from its chief executive Mark Shorrock yesterday, who said: “It is imperative that we conclude our structuring and commercial negotiation with government within the next six weeks.

“This is entirely possible; the review should not impact the finalisation of our commercial discussions.”

Shorrock said Swansea Bay is “ready to go now” and has a delivery team and supply chain already in place, adding that a decision needs to be taken soon if the project has a future.

He said: “If tidal lagoon power at scale is to be a real option for the longer term, we need to start work on Swansea Bay Tidal Lagoon now.

“Otherwise the opportunity will be lost and the review will be all for nothing.”

DECC also expects Tidal Lagoon Power to take part in the government’s review on lagoon power, which will look at how tidal lagoons can have a “cost effective role” as part of the UK’s energy mix, and how to roll out tidal lagoons at scale in the UK and internationally, including supply chain opportunities.

It will also focus on how to finance tidal lagoon projects, and explore whether a competitive framework could be put in place to deliver tidal lagoons.