RIBA gongs for Allies and Morrison and Niall McLaughlin 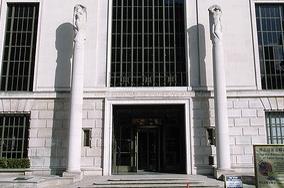 Two architects sweep the board an annual regional awards ceremony

Allies and Morrison and Niall McLaughlin architectave swept the board at the 2009 RIBA regional awards.

The London-based Allies and Morrison gained accolades for schemes including Liverpool One development, a car park in Sheffield, One Vine Street development, Regent Street, in London.

Niall McLaughlin architects won awards for a bridge in Wessex, Deal Pier. It picked up a European award for Burren House in Dublin.

Hawkins and Brown and BDP both made a good showing gaining three awards apiece.

Other well-known schemes to pick up one of the 97 awards were the Unilever headquarters refurbishment and restoration by, Kohn Pedersen Fox Associates; Rafael Viñoly's Curve in Leicester; Eric Parry’s restoration of St. Martin-in-the-Fields church in Charing Cross; and Grimshaw’s UCL Cancer Institute: Paul O'Gorman Building.

The winners will go forward to be considered for RIBA’s Stirling Prize, the shortlist for which will be published in July.