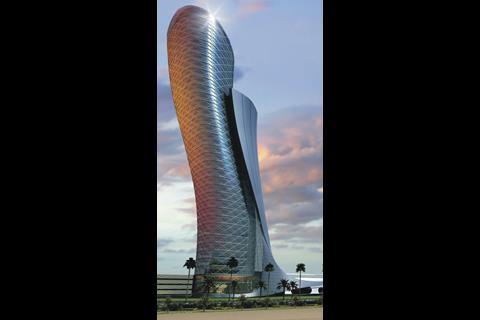 Capital Gate’s floor plates are stacked vertically up to the 12th storey after which, they are staggered over each other by between 300mm to 1400mm giving rise to the tower’s dramatic lean.

The tower features other innovative construction techniques including the world’s first known use of a ’pre-cambered’ core, which contains more than 15,000 cubic metres of concrete reinforced with 10,000 tons of steel. The core, deliberately built slightly off centre, has straightened as the building has risen, compressing the concrete and giving it strength, and moving into (vertical) position as the weight of the floors has been added.

His Excellency Ali Saeed Bin Harmal Al Dhaheri, ADNEC’s managing director, said: “Capital Gate has been a true design-and-build project from the very start. There have been numerous challenges, which I am pleased to say we have surmounted thanks to a structured partnering programme and the hard work and commitment of everyone involved.”

The building, which is at the Abu Dhabi National Exhibition Centre, will house the 5-star Hyatt Capital Gate hotel and around 20,000sqm of office space.