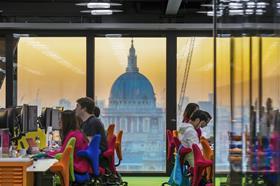 Richard Rogers has confirmed that his firm has now axed around 10% of its staff with the architect laying part of the blame on Brexit.

Rogers Stirk Harbour + Partners said over the summer it had begun redundancy consultations with a number of staff because of economic uncertainty.

Rogers told Building his practice, based at the Leadenhall building (pictured) the firm designed in the City of London, has now laid off 15 staff and added: “It’s tremendously sad. I think we’d only done this once before.”

He said ongoing uncertainty over Brexit had meant some jobs the firm was eyeing had now been mothballed.

“Brexit doesn’t help, that’s for sure,” he added. “We have quite a lot of international work but Brexit is bad news in my opinion.”