Revised plans by Rogers Stirk Harbour + Partners to extend and refurbish a grade II listed town hall in west London have been approved by planners.

The scheme to revamp Hammersmith town hall is being developed by Hammersmith & Fulham Council and housing firm a2 Dominion.

RSHP submitted the scheme for planning last April and hoped work would begin on the flats, offices, shops and cinema in the autumn. But objections from Historic England and others delayed the project.

The scheme will include retail and restaurant space as well as just over 200 flats.

Work will involve tearing down an extension built in the 1970s and building new public realm as well as adding a glass box rooftop extension that will be used by the council. The main change in the revised plans was lopping a storey off the extension on the old town hall.

The scheme has had a chequered planning history. RSHP – which used to be based in Hammersmith – is the third architect to work on the project after Sheppard Robson and Lifschutz Davidson Sandilands schemes came to nothing.

Work is exepcted to start next year and complete in late 2022.

Other firms working on the scheme include landscape architect Gillespies and structures consultant Aecom. 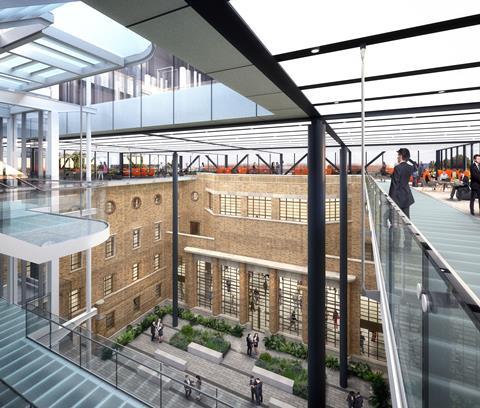