Search for contractor for London modular homes scheme kicks off 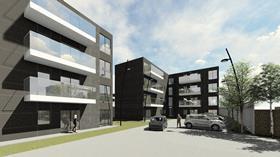 A call has gone out for site works firms to bid for the contract to erect 200 modular temporary homes across London.

The £15m, 60-month job will see the homes go up on between eight and 10 sites across the capital in the first five years of the contract, as part of the Pan-London Accommodation Collaborative Enterprise (Place), a not-for-profit company set up by a group of London boroughs to provide accommodation for homeless Londoners.

A further 100 modular homes could be built on another four to six sites if a contract extension option is used.

Interested firms have until 4 October to bid for the work.

The Place scheme, a London-wide effort to increase the availability of high-quality temporary accommodation options in the capital, is being hosted by the London Borough of Tower Hamlets.

But a spokesman for London councils said several boroughs were looking into suitable locations for Place homes.

The contract will require the successful firm to prepare sites and undertake groundworks, foundations, utilities installation and landscaping. It will also be required to assemble and erect the modular homes, being manufactured by Wandsworth-based Extraspace Solutions as part of a £40m deal.

The winner of the site preparation contract will also be required to dismantle the homes when necessary, move them a new location and put them up again.

The London councils’ spokesman said Place expected the first site would be confirmed later this year, although details weren’t currently being revealed.

Any site will need to go through the usual local planning processes, the spokesman added.