Sellafield operators ‘set to be scrapped’ by government

International partnership to be stripped of £9bn job 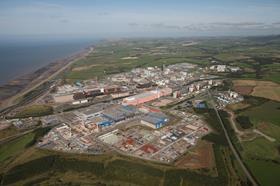 Ministers are expected to announce today that private consortium Nuclear Management Partners (NMP) will lose its contract to clean up nuclear waste at Sellafield, according to reports.

The partnership, which brings together US engineering group URS, Britain’s Amec and French energy company Areva, was given a 17-year contract to run the nuclear site in Cumbria in 2008, and granted a five year extension in 2013.

However, the Guardian has reported a Department of Energy & Climate Change spokesperson saying energy secretary Ed Davey is unhappy with the pace of work at the site.

“Ed Davey has been very clear that he’s wanted to see more effective progress in decommissioning the biggest and most complex nuclear site in Europe, providing the best outcome for the taxpayer,” the spokesperson said.

“The Nuclear Decommissioning Authority and government have been working with industry experts on alternative options.”

A statement from NMP general manager Iain Irving said the parternership understood “alternative options to the current arrangements for managing Sellafield” had been under consideration.

“It is not possible for us to make any further comment at this time,” he said.

“Notably however, since the NDA awarded NMP with a five year contract extension, the site has enjoyed one of its best ever periods of performance and progress.

“Importantly, over the last two years, we have consecutively achieved the site’s best overall safety records.”

Last year MPs on the influential Public Accounts Committee called for NMP to be stripped of its contract if performance at Sellafield did not improve.

It said missed targets, escalating costs, weak leadership, and slipping deadlines had resulted in poor progress with the site’s cleanup.