The new construction director of Paddington Square developer Sellar will beginning meeting contractors this summer to find out who is interested in taking on the £350m deal.

Paul Flexney-Briscoe joined the company behind the Shard last month after spending five years at Landsec where he was in charge of the £440m Nova scheme in London’s Victoria.

Kent firm Erith has begun putting up scaffolding at the site next door to Paddington station and will next month start tearing down the Royal Mail sorting office earmarked for the new building drawn up by Shard architect Renzo Piano.

Erith’s £6m contract is due to finish at the end of the year ahead of piling and enabling works starting on the office and retail scheme early next year.

Flexney-Briscoe, whose CV includes spells at Sir Robert McAlpine, Bovis Lendlease and EC Harris and joins as a replacement for Flan McNamara who left Sellar last December after eight years at the firm, said he expects to begin meeting contractors in the next few weeks ahead of drawing up a shortlist of firms.

The deal will be let as a two-stage design and build contract with up to half a dozen firms shortlisted before that number is cut by half with a winner due later this year.

The job, previously known as the Paddington Cube, will be one of the largest to come up for grabs in London since Lendlease picked up the Google headquarters scheme at King’s Cross last year.

Lendlease is expected to pitch for the deal while other firms also thought to be interested include Nova contractor Mace, McAlpine and Multiplex along with Skanska and Laing O’Rourke.

Flexney-Briscoe said: “It’s an open market and everyone will be given a fair shot.”

As well as the 14-storey office block, which is also next door to St Mary’s Hospital, Piano’s plans include retail and restaurant space along with a new public square.

The scheme will also include a new ticket hall for the Bakerloo line station at Paddington which will be built for LUL. Piano has not designed the enlarged hall with this part of the deal, worth around £40m and included in the main contract, being drawn up by Acanthus Architects.

Flexney-Briscoe will spend most of his time working on Paddington Square but is also expected to be involved with Sellar’s other schemes at London Bridge’s Shard Place, where Mace is carrying out work on a residential block, and another residential development at Canada Water. 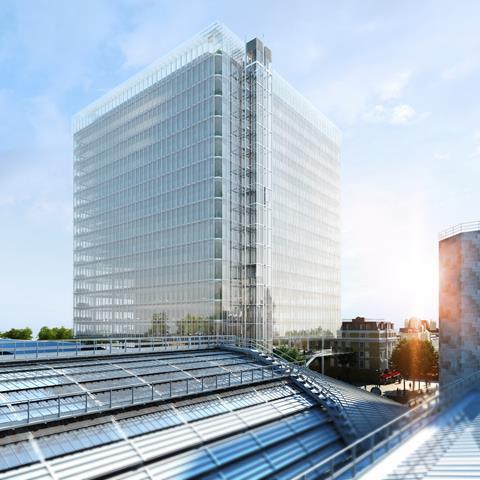 The 14-storey block will sit on four floors of retail