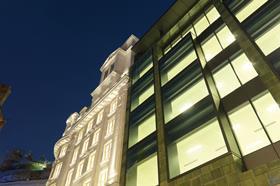 A construction manager at contractor Sir Robert McAlpine has been awarded the title of Construction Manager of the Year by the Chartered Institute of Building.

Tim Hare was given the title for his work on the £165m redevelopment of the grade two listed Regent Palace Hotel in Piccadilly, London into office, retail and residential space.

The project, called Quadrant 3, was delivered four months ahead of schedule and 20% under budget with no accidents to staff. To do this the team had to complete one of London’s biggest asbestos removal jobs and deal with a permanently flooded basement while maintaining the building’s art deco finishes.

The task was completed using BIM on all structures and services to avoid clashes, aid prefabrication and safety.

Chris Blythe, chief executive at the CIOB, said: “Tim’s achievement was made more brilliant by the manner in which he earned it. Quiet, level headed and sure, he dominated the project through collaboration.

“He recognised the contribution each member of his team and the wider site workforce could make, and gave them the space and the belief to give their best.”