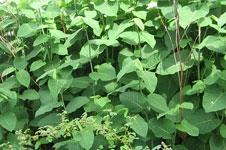 The government has launched a consultation on a plan to introduce a Japanese predator into the UK to control knotweed, in what would be the first example of biocontrol in Europe to tackle a weed.

The Department for Food and Rural Affairs and the Welsh Assembly are soliciting views from the public before the plan is put into practice.

Knotweed can grow by as much as a metre in three weeks, undermine the foundation of buildings and bring construction sites to a halt.

Since being introduced into the UK from Japan in the 19th century, the plant has spread rapidly throughout the country.

If the plan gets the go-ahead, the insect, a small psyllid called Aphalara itadori that feeds on the sap of the superweed, stunting its growth, could be released in the UK next summer.

Dick Shaw, the lead researcher on the project, said: “This psyllid is a true knotweed specialist and our research shows that it could be a safe and effective control agent for one of our worst weeds.

“We are really pleased that the programme has reached the public consultation phase and look forward to hearing the outcome.”