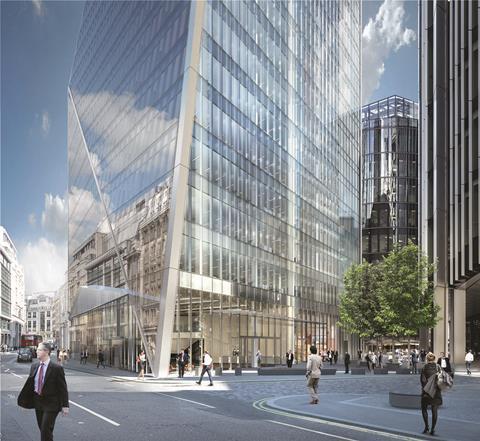 Skanska has started work on its £198m contract to build its ‘Scalpel’ tower project in the City of London.

US insurer W.R Berkley confirmed today that Skanska is working on the project at 52 Lime Street, which is one of the largest construction contracts to come onto the London market in recent years.

Designed by Kohn Pedersen Fox as a European HQ for W.R. Berkley, the 190m-tall commercial office development will contain 400,000 sq ft of office floorspace over 35 floors as well as two basement levels, including shops and restaurants.

Floor plates will range in size from 6,500 sq ft to 16,000 sq ft and are arranged around a side core located to the south of the building, offering views of London to the north, east, west and south west.

Skanska is responsible for the construction, mechanical and electrical engineering and installation of services within the development, which has been dubbed ‘The Scalpel’.

Building revealed last year that Skanska had beaten off competition from Mace for the job, which is scheduled for completion in early 2017.

The Corporation of London granted planning consent for the tower, which is located near the junction of Lime Street and Leadenhall Street, in January last year.