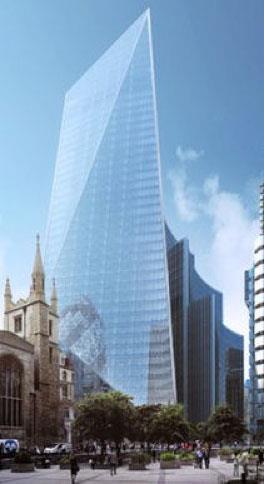 Architect Kohn Pedersen Fox’s design for the £500m Scalpel tower in the City of London has been awarded the first certificate under the new version of the BREEAM sustainability standard.

The building at 52 Lime Street in the City, engineered by Arup for WRBC Development, was awarded an excellent rating for its design.

The 190m tall 35-floor office tower is set to be built around a side core to the south of the building that will limit solar gain and maximise its floor plate size.

The development will also include a 11,000ft2 public square and is due to complete in 2017.

Andrew Reynolds, managing director, WRBC Development, said he was “delighted” the scheme had received such a high BREEAM rating.

He added: “Our team is determined to deliver a high performance building that is not only architecturally superb but creates a pleasant and productive environment for those who will be working there.”

Gavin Dunn, director of BREEAM, said the BREEAM UK New Construction 2014 scheme, which the building was rated under, represented “the latest and highest standard of sustainability”.

He added: “This achievement demonstrates a genuine commitment by the project team to deliver a high-quality development that will benefit the building owners and occupiers into the future.”

Skanska is the main contractor on the project.