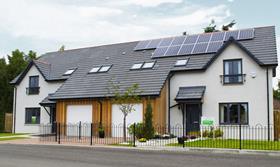 Springfield Properties said it completed a third more homes in the first half of the year as pre-tax profit nearly doubled for the Elgin-based housebuilder.

Springfield bought rival housebuilder Dawn Homes in May last year for £20m, a move which helped boost the group’s landbank – currently standing at 15,096 plots, up 21% – as did the acquisition earlier this month of Livingston-based Walker Group, which has 10 sites on its books, for up to £31m.

Springfield’s private housing arm completed 234 homes, up 27%, while its affordable homes operation finished off 145 homes, up 51%.

It said it was continuing to develop its ‘Village’ sites, including securing land for a fifth Village for 2,500 homes at Gavieside, Livingston.

Innes Smith, Springfield’s chief executive, said the firm had “made great progress during the first half of the year, with sales increasing in both of our private and affordable housing divisions.

“Our investment last year in the acquisition of Dawn Homes and our four high calibre managing directors has greatly strengthened our business.”