Tottenham Hotspur has ringed its game against Manchester United nine weeks away as its opening match at its new stadium, Building understands.

Last month the club said it had written off playing home league games at the new ground this side of Christmas meaning that by the end of the year nine of its scheduled 19 home league games will have been played at its temporary home of Wembley stadium.

But Building understands the club is pushing main contractor Mace to get the stadium ready in time for its game against Manchester United – the last club to visit Spurs’ old White Hart Lane ground last May – on 13 January.

Around 2,000 workers are still on site – down from the project peak of 3,800 in July – with the remaining work centred on testing and commissioning the thousands of fire alarms at the 62,000 seat ground.

In August, when Spurs first said the ground would be late, Mace told Building faulty wiring was behind the delay after it discovered problems with the alarms during the commissioning and testing phase.

The stadium was originally due to open on 15 September but Spurs delayed its opening until the end of October as the club hoped it would be ready in time for its game against Manchester City.

In an update in early September the club confirmed it would miss this game but declined to say when it would open before issuing last month’s update which said its home games up to and including Wolves on 29 December will now be played at Wembley instead.

Mace referred calls to Spurs who, in a statement, said: “As previously stated, we are being cautious in respect of our timetable for test events and official opening game as a result of factors outside of our control, contractors missing deadlines and possible future unforeseen issues. We shall issue a further update next month.” 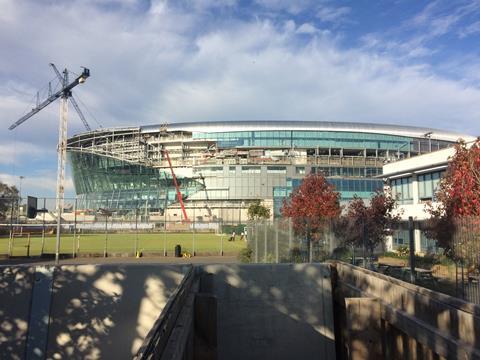 How the ground looked three weeks ago