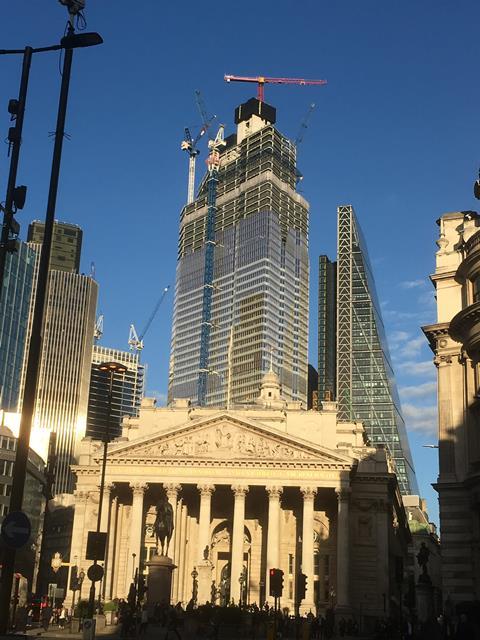 When finished, 22 Bishopsgate will be the tallest block in the Square Mile at 278m high

The City of London is still the place to put up tall buildings in the capital, the man in charge of the Square Mile’s skyline has said as new research shows the area is shrugging off worries about the UK’s impending departure from the EU.

The City has been chosen as the number one destination for businesses to locate global teams to with research revealing that 37% of over 450 senior leaders of large companies across the world viewed London as the best location for their global teams.

It put the Square Mile ahead of rivals like New York, Paris and Singapore and the City’s chairman of its planning committee said he expected more tall towers to go up over the coming decade to cope with increased demand from overseas investors.

Chris Hayward said: “When the Brexit vote took place, a number of us were seriously worried about a massive exodus. That hasn’t happened. There have been some job losses but nowhere near as huge as might have been feared.”

The City’s workforce has increased 27,000 to 513,000 in the past three years, he said, with Crossrail, which has three stations serving the City, expected to add another 70,000 workers when it is eventually completed.

Hayward said he saw the main threat to the City’s pre-eminence post-Brexit coming from New York and Singapore rather than Paris or Frankfurt.

He added: “Overseas investors still see London as a safe haven so we’re feeling quite bullish about the future of the City,” Hayward said. “I see a continued growth of buildings in the City over the next 10 years. We’re not Teflon-proof but there is still a huge global interest in the City.”

He admitted some schemes had not been built out as quickly because of Brexit and warned the government that the City needed to leave with a deal at the end of the month. “A deal is critical, it is better than a no-deal. Business has had three years of this, it needs certainty.”

But he said he was preparing for the government to extend the UK’s departure date from the EU, which is now less than four weeks away. “We don’t believe in a second referendum [but] personally I think [the 29 March leaving date] will have to be extended.”

Hayward said he expected the majority of tall buildings to go up on sites between the so-called Eastern cluster, the area around Bishopsgate, where Multiplex is currently building the City’s tallest tower, the 278m high 22 Bishopsgate, and the Walkie Talkie building at Fenchurch Street.

One building already slated for the Eastern cluster is Eric Parry’s 1 Undershaft although work on this is unlikely to begin for a number of years with insurance firm Aviva not due to move out of the existing site until 2022. “The architect assures me the client [Singaporean developer Aroland Holdings] is determined it will happen.”

The latest research carried out by the City of London and the City Property Association said firms were drawn to London because of the depth of talent they can hire in the Square Mile.

Catherine McGuinness, policy chair of the City of London Corporation, said: “This data shows that businesses place a high value on the capital’s innovative cluster of talent and creative energy when it comes to making location decisions.

“As the concentration of financial, professional services and TMT [technology, media, telecom] industries blend, it is vital that London continues to be the first to attract top talent.”

Other findings from the survey also singled out London’s appeal to global markets with as many as 90% of firms surveyed in China, India, Brazil, Saudi Arabia and Indonesia saying they were considering a move to London.

The 32 page report, called Locate, create and innovate: London in a changing world, will be formally presented at the Mipim property show next week.