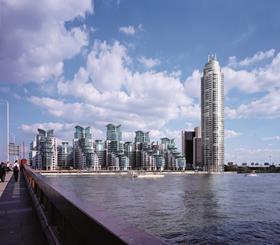 The Tower at St George Wharf

The construction arm of developer St George has been fined after a worker was seriously injured when a when a temporary platform collapsed at a landmark site in south London.

Noel Doyle, 32, from Hammersmith, suffered a shattered right elbow, broken vertebrae, fractured pelvis and ribs, and damage to internal organs in the incident at St George Wharf in Vauxhall on 10 February 2009.

He fell almost ten metres from a platform when it gave way, landing on a concrete staircase below.

St George South London Ltd (SGSL), the principal contractor for construction work at the site, wafined £50,000 and ordered to pay £27,386 in costs after an investigation by the Health and Safety Executive (HSE) identified a number of failings.

Southwark Crown Court heard that on the day of the fall Doyle was helping two colleagues, including a foreman, to raise a temporary work platform inside a concrete shaft to house a stairwell within a building under construction.

The platform was lifted from one floor to another by a crane using four lifting chains before being locked in place in the shaft to enable the next level to be constructed.

It had been raised from the fourth to the fifth floor level when the crane operator was inadvertently instructed by the foreman to take the chains away while one of them was still attached.

The platform was lifted by only one corner and disintegrated.

Of the three workers standing on the temporary structure at the time, two managed to jump to safety but Doyle was unable to do so.

He fell into the shaft beneath with parts of the platform and equipment that had been stored on top raining down on him.

Doyle required extensive treatment and physiotherapy, and has been left with limited movement in his right arm because of the elbow injury.

He is no longer able to work in construction.

The HSE investigation identified that SGSL, as the principal contractor, had failed to properly plan and manage the construction work so as to avoid risks to safety.

The company failed to ensure that their subcontractors had developed and implemented safe systems of work, particularly in relation to the management and use of temporary works.