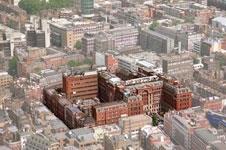 According to reports, the group is on the verge of securing the role of development director on the project for the knockdown fee of £50m. However, in a statement Kaupthing has said no agreement has yet been signed and that the site has not been sold. If an agrement if reached, Stanhope will oversee the development, design and reorganisation of the site with the aim of maximising its value. Should the agreement go ahead, Stanhope will also inject new capital into the project.

The site was acquired by Kaupthing and the Candy Brothers' CPC Group in 2006 for £175m.

Stanhope, which was tipped by Building as a frontrunner for the role in November, was up against private property company London & Regional for the role after a shortlist of 10 bidders was whittled down to two in the New Year.

The firm would work with architects Allies and Morrison on the scheme and wouldl enter into a joint venture with Kaupthing to run the site.

CPC, the offshore company of property entrepreneur brothers Nick and Christian Candy, swapped its equity stake in the scheme with Kaupthing, its joint venture partner, last year. In exchange, CPC took full ownership of a £330m project in Beverley Hills.

The swap meant that the Candy brothers' Candy & Candy arm would no longer automatically be development manager on the Fitzrovia scheme, which also includes office space.