Stuart Lipton: Housing quality won't rise unless supply does too

The design quality of new housing is unlikely to improve until the nation is better able to keep up with demand for new properties, veteran developer and former Cabe chairman Sir Stuart Lipton has said.

Lipton, who is currently developing the PLP Architecture-designed 22 Bishopsgate building with partner Peter Rogers, told a Policy Exchange debate that new legislation never seemed to “get it right” when it came to design quality for housing.

Speaking in the wake of Theresa May’s admission that the government needed “to do far more to get new houses built”, Lipton said a concerted effort between ministers, local authorities, and housebuilders was required.

“Every piece of housing legislation since 1949 has failed, because we’re still in this chronic shortage,” he said.

“To me, this is all about increasing supply. If we had a surplus of supply, we’d have quality with it – people would start competing with each other, and they don’t really do that.”

Lipton, who developed London’s Broadgate Centre in the 1980s and chaired Cabe from 1999-2004, told the session on housing that he feared mistakes of the 1960s and 1970s were being repeated.

“We seem to be in a position where we’re building new ghettoes,” he said.

“There are a lot of new estates tbat are remote from their society. They are about large groups – 500 flats, whatever; they don’t communicate in the way that traditional towns and cities used to communicate. The seamless flow from one project to another just isn’t there, and yet infill allows that.”

“Good design costs no more than the ordinary: Let’s get some government passion on this,” he said.

“It’s not [about] who is the new housing minister, it is who’s got the commitment. In the past seven years, no-one’s talked the ‘A’ word – no architecture at all.”

At the event, titled “Housing: What do we want from the new government?”, Lipton accepted that ministers could not be responsible for every aspect of design and the shortfall of supply.

He also called for a radical upgrade of the planning system, with more planning officers, more power to local planning authority directors, and more certainty for developers.

“I’d change the system: a red line around the site saying massing height and bulk,” he said.

“You only get your permission if your design is approved. Make sure that quality is always the denominator.” 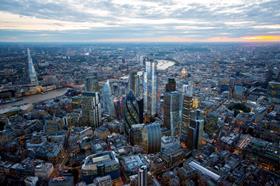