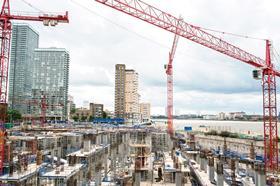 Tender prices rose by 2.4% in the fourth quarter of 2014 compared with the previous quarter, and by 7.1% on a year earlier, according to the latest report from RICS’ Building Cost Information Service (BCIS).

A sharp increase in workloads for contractors drove them to increase tender prices significantly over the last three quarters of 2014. However, prices are expected to slow to more moderate increases in 2015 as contractors adapt to the increasing workload.

New output in construction is forecast to grow strongly over the next five years. As conditions improve, the BCIS predicts that new work output in the industry will increase by 6% in 2015 and 4% in 2016.

Peter Rumble, head of forecasting at RICS, said: “As workload continues to grow over the remainder of the forecast period, and with increasing pressure from resource costs, it is anticipated that tender price increases will rise between 4.5% and 6% per annum.

“Over the next five years, tender prices are forecast to rise by about 28%.”