TfL to face the music for Garden Bridge decisions

A senior figure from Transport for London is set to appear in front of a London Assembly inquiry into its handling of the failed Garden Bridge project.

The Assembly's Garden Bridge Working Group will question the transport group's head of corporate services Andy Brown about the scheme, which earlier this year was revealed to have cost more than £50m, with the hit to the public purse reaching almost £43m. 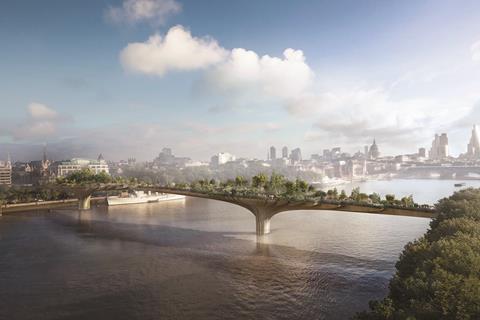 TfL handed the scheme £24m with a further £19m being given by the Department for Transport.

In a statement the Assembly said the session, which will take place later this morning (15 April), would look at TfL's role in the project's failure.

It said: "The Garden Bridge working group will examine whether TfL’s oversight of the project was robust enough, its relationship with the Garden Bridge Trust, and whether it was right to release further public money for the project."

But trustees from the Garden Bridge Trust charity, the group responsible for building the bridge, invited to the session have refused to attend.

In a letter to the working group chair Tom Copley, Lord Mervyn Davies, chairman of the Garden Bridge Trust, said no one from the trust was prepared to face the inquiry.

He wrote: "We do not believe the working group to be representative of the full membership of the Assembly; and nor can we have faith in its objectivity given that leading members of the group have been so critical of both the Garden Bridge project and the Trust over a matter of years, without at any time feeling it would be helpful to speak to the Trust.

"Had they done so they would have learned that there is indeed another ‘side of the story'."

Davies said if the working group had any "questions born of a genuine spirit of enquiry" the trust would respond in full and in writing.