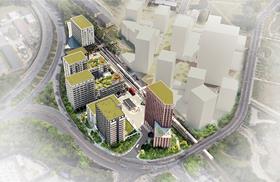 TfL has picked the developers for its 400-home Kidbooke scheme

The head of Transport for London’s property business has said it wants to triple the number of homes it builds each year to 3,000 by the end of 2018.

Speaking at Ecobuild, TfL’s commercial development director Graeme Craig said the body will aim to bring forward a major scheme each month by the start of next year and increase delivery of homes from the current 1,000 to 3,000 – which will see 10,000 homes built by 2020.

Craig said: “We are aiming at bringing forward a new scheme every month, this means that during the mayor’s time in office we should have bought forward sites which can offer up to 10,000 homes.”

Craig, who heads up a 25-strong property team at TfL, has been tasked with identifying sites for new homes on the 5,500 acres of land it owns across London. So far, TfL has committed to building homes on 300 acres of its land.

The scheme is the first to be awarded under Transport for London’s 13-strong property partnership framework, which has on it firms including Balfour Beatty and Land Securities.

Craig said it had looked at setting up a separate company to manage its property work but admitted: “What we immediately saw is that if you have any separation at all from the operation, engineering and development the land just won’t come forward.

“You have to persuade the 30,000 people in TfL that it is in London and their interests to turn a transport company into one which is comfortable managing property.”