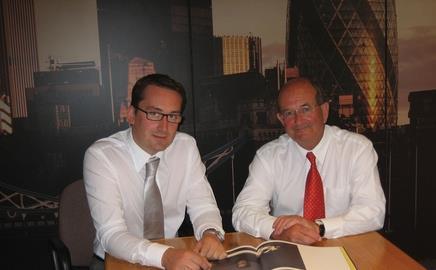 The past two years have been the toughest of Mike Hollis’ career. Sitting in his office in Isleworth, west London, the affable 65 year old still remembers the phone call in February 2006 that informed him that Schmidlin UK, the firm he’d spent 18 years building up, was as good as bust.

Since the call, Hollis has managed to achieve a feat that has eluded scores of other cladding bosses over the years – he has brought his firm back from the brink. And now he needs to go and do something else. He has retired as managing director of the rejuvenated Lindner Schmidlin and the man who succeeds him, Jürgen Wax, faces the rather less brain-twisting job of taking the company forward. Here the two explain how the company put its troubles behind it.

Founded in Switzerland in 1938, Schmidlin was regarded as one of the top curtain wallers in Europe and a leader in the UK market. Its long track record culminated with the Swiss Re tower, completed in 2004. Then warning signs began to appear. Suppliers to the parent company had approached the UK arm to ask if it would pay their bills for projects in the UK. Hollis flew to Switzerland in early 2006 to talk face to face to the parent company bosses and was assured there was no cause for concern.

This was far from the case. It soon emerged that there had been serious losses on projects in Europe – including one totalling €6m (£4.8m) – and, finally, the company’s owners, Credit Swiss and UBS, decided to call it a day. “It wasn’t as if they didn’t have the cash, they just chose not to support the business any more,” says Hollis. Clearly rankled, he adds that the decision to write off Schmidlin UK was made the week that the same banks declared billions in profits.

The outcome for the UK arm was grim. Although it had consistently made money, it was owed almost £7m by the parent company and with a balance sheet worth £2.5m it was technically insolvent. “It was a crazy situation,” Hollis says. “We had 250 people working for us and several large projects on site, yet we were faced with going under.”

Even as the receivers locked the gates to the Swiss factory, Hollis was determined to keep trading. “We had materials here that

we could continue to fix on site and the receiver in Switzerland had materials that we could use. We had to have the confidence that by keeping going it would leave us in a better situation than if we gave up.”

But things were to get worse yet. Four weeks later the German cladding firm TSK Troester agreed to buy the Swiss parent but said it was not interested in the subsidiaries.

A tense three weeks followed as Hollis, desperate to find a buyer, phoned everyone he knew. Then his lawyer mentioned a client that had expressed an interest in expanding into the curtain walling market. “It was a complete fluke,” he says. Twenty-four hours later the management of German fit-out specialist Lindner arrived to size up the business and within three weeks Lindner Schmidlin was formed. “We were within a day or two of going under,” says Hollis.

After the buyout – for a “six-figure sum”, according to Wax – the company hung on to jobs such as Heathrow Terminal 5 and won a string of projects including the Rotunda in Birmingham, which opened in April this year. Other projects are now at various stages of completion and two multimillion-pound schemes are to start in London in September.

The comeback has been hard fought. “There’s no question that the market looked at us and waited,” says Hollis. “We did get work because the market was looking for suppliers and it was hungry, but we were certainly excluded from some projects because people didn’t want to be first.”

This year’s turnover is expected to be about £30m, up £12m on the previous year, with profit anticipated to be 3-5%. Hollis is happy enough to be calling it a day, although he is carrying on as a non-executive director.

Enter Wax: the former project manager with Lindner has been involved with the buyout from day one. Taking the company forward in the current economic climate is a challenge but he remains confident. “There’s a good team here,” he says. “And although we don’t have the reputation that we had previously, we’re on the way”.

The short-to-mid-term plan is simple. Wax says: “In the next three years, the target is to get Lindner Schmidlin back where Schmidlin was. It’s naive to say we want to be the market leader in curtain walling but we do have high ambitions and we want to be a major player. We want a turnover of £40-50m a year through growth mainly in the UK and other European markets.”

The longer-term plan is to look at entering markets further afield. Already, Lindner Schmidlin is quoting for projects in Ireland, Scandinavia and Russia. The Middle and Far East are also targets. “What helps us is that Lindner has companies in almost every country in Europe and in China, Dubai, Russia and the US,” says Wax.

In September, Lindner Schmidlin will open a factory, doubling its manufacturing capacity. Wax is also poised to take the firm, which until now has focused on high-end projects, into new territory with the launch of its own off-the-shelf cladding system. “The problem with the A-sector projects is that the workload goes up and down all the time, so we thought it would make sense to have a standard product that enables us to go into projects that are more repetitive.”

And what of the Schmidlin name, which for so long was the mark of technical excellence? “We think the Schmidlin part of the name is still helping us but I think the day will come when we drop it,” says Wax. Hollis nods his agreement. “I don’t think the name will go away in a hurry,” he adds.

Projects that put Lindner Schmidlin back on track

The 21-storey, grade II-listed Urban Splash redevelopment in Birmingham was the first project won after Lindner bought out Schmidlin UK. The glazing of the 232-apartment block took six months and was opened in April this year.

Originally a Schmidlin UK project, Lindner Schmidlin carried on with work on the concourses, rail station and the car park at the huge scheme. It provided project management and installation services, including the supply and manufacture of doors and rail and bus screens. The work was completed in December last year.

Work on the Foster + Partners-designed office building was completed in January 2007 and required the installation of 1,800m2 of steel and glass facades including curved feature walls and a double-skin facade.

Completed in July this year, the 22-storey office building designed by RHWL has a textured fritted glass facade as the building’s main design feature. The installation included 14,000m2 of cladding with large projecting fins.

Lindner Schmidlin at a glance

Managing director Jürgen Wax
Predicted turnover for 2008 £30m with an expected profit of between £900,000 and £1.5m
Staff 170 in the UK, with a further 75 designers and engineers in Germany and 200 production staff
Number of offices Six
Key sectors Offices, residential towers, airports