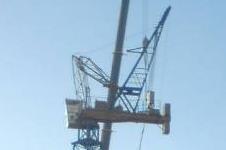 Proposals for the tower crane register will be published on Monday, Building can exclusively reveal.

The Health and Safety Executive is launching the consultation in preparation for the scheme which is due to be rolled out in April 2010.

The decision to create the register in January followed a two year drive by Building to improve crane safety, as part of Building's Safer Skyline Campaign.

The consultation, which will close on 9 October, outlines options for key aspects of the scheme, including which types of cranes and uses should be covered.

Under the proposals, the HSE will have to be notified of details about a tower crane being used on a site, including the name and address of the crane owners, the site address, details needed to identify the crane, the date of its thorough examination, details of the employer for whom the examination was made, and whether any defects posing a risk of serious injury were detected.

All details notified to HSE will be contained in a register that will be open to public scrutiny. Each registration will cost £20 to cover administration costs, it is proposed.

The HSE has proposed that the scheme should cover the use of conventional tower cranes on construction sites and will look for views on whether this should be extended to include self-erecting cranes and those used in non-construction settings.

Around 2,400 tower cranes are thought to be operated in Britain, with around 1800 in use at any one time.

A spokesman for HSE said: “There have been a number of high profile and tragic failures of tower cranes in recent years and there is widespread interest in finding ways to improve safety.

“The consultation we have launched today is designed to give everyone with an interest in the safe use of tower cranes a chance to have their say.

“We are giving people an opportunity to shape significant aspects of the scheme and we look forward to receiving their responses.”

Eight people have been killed in incidents involving tower cranes since 2000. The tower crane