Two left in the running for £18m Aberdeen road job

Balfour Beatty up against Farrans for Transport Scotland job 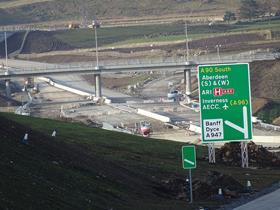 Balfour Beatty is up against Northern Ireland contractor Farrans for an £18m congestion-busting road job in Aberdeen.

The pair are chasing the city’s A90/A96 Haudagain Improvement project which is part of a wider upgrade of roads around the Scottish city which includes the £550m Aberdeen Western Peripheral Route (AWPR).

The latest deal involves building around 500m of new dual carriageway connecting the A90 North Anderson Drive and the A96 Auchmill Road.

Balfour Beatty is working on the 58km long AWPR scheme (pictured), which is expected to be completed later this summer, alongside remaining joint venture partner Galliford Try.

In January, the pair said the collapse of Carillion, their partner on the scheme, would cost them £80m in funding which under the terms of the PFI deal they were required to plug.

Last month, Galliford Try said the job was costing it more money and in its interim results said it had racked up a £25m separate hit on the job. The firm had previously flagged up problems on the deal when it announced a £98m blowout on legacy contracts last May.

Balfour Beatty is set to unveil its 2017 results tomorrow.