UAE economy could shrink this year 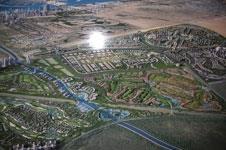 The UAE economy could shrink this year, a minister has said. The comments from economy minister Sultan bin Saeed al-Mansouri go against previous government statements, which said the economy would continue to grow, albeit at a slow rate.

Mansouri said today that depending on how the second half of 2009 goes, the UAE’s economy could see negative growth. He said: “There could be some contraction if the world economy goes on like this.”

Ratings agency Standard & Poor’s also said this week that Dubai’s economy could shrink by between 2 and 4 % this year.

The UAE, the world’s fifth largest oil exporter, is suffering from lower levels of oil demand as well as the slowdown in its real estate market.

In Dubai, which has no oil, last year real estate accounted for around 65% of GDP.