Uefa has said a final decision on where Spurs will play its Champions League quarter final will be made after the draw has taken place this Friday.

Last Friday, the club said its new stadium will finally be ready to host a competitive fixture in the first week of April.

It said the game will be either against Brighton and Hove Albion or Crystal Palace. The opening game depends on the progress of Brighton in the FA Cup.

But, although widely expected to take place at its new ground, Spurs stopped short of confirming its Champions League quarter final would be played at the new ground, saying it had held discussions with the governing body about where the game will be played.

In a statement, Uefa told Building: “Uefa remains in close contact with Tottenham Hotspur to assess the possibility of the club hosting Uefa competition matches in their new stadium this season. We expect the venue for their Uefa Champions League quarter-final home match to be announced following the draw on Friday.”

Spurs has played all its home Champions League matches this season at its temporary home of Wembley stadium while Mace completes building work at the 62,000-seat ground.

The stadium had originally been due to open in the middle of September last year. 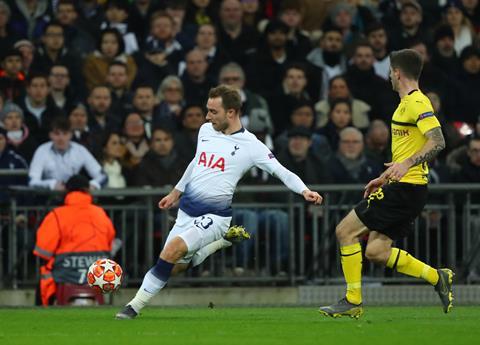 Spurs beat Borussia Dortmund 3-0 at Wembley last month, eventually progressing over the German side 4-0 on aggregate to get to the quarter finals