Opening game will be in first week of April 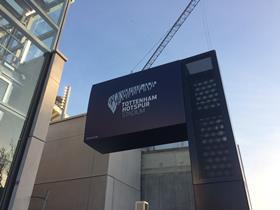 Tottenham Hotspur has said that its new stadium will finally be ready to host a competitive fixture in the first week of April.

In a statement this evening, the club said the game will be either against Brighton and Hove Albion or Crystal Palace.

The opening game depends on the progress of Brighton in the FA Cup.

If Brighton beat Millwall in the FA Cup next weekend, Crystal Palace will be the visitors on 3 April. But if the Seagulls are knocked out they will be the opposition on 6 or 7 April.

The news also means that Spurs will play its home Champions League quarter final tie at its new ground as well. The draw for this round takes place next Friday with the quarter final ties taking place on 9/10 April and 16/17 April.

“If Brighton win their FA Cup quarter-final match on Sunday 17th March we shall play Crystal Palace on Wednesday 3rd April and Brighton on 23rd/24th April.

“If Brighton lose their FA Cup quarter-final match on Sunday 17th March we shall play Brighton on 6th/7th April (subject to Champions League scheduling) and Crystal Palace on 23rd/24th April.”

Two test events at the new stadium will feature a Spurs Under-18s match against Southampton on 24 March before a Legends match on 30 March.

Mace blamed faulty wiring for the delay and since then Spurs has been forced to put out a number of bulletins telling fans the stadium was still not ready.

More evidence that Spurs was preparing to open the stadium emerged earlier today after adverts appeared for new waiters and bar tenders to start at the ground this month.

They came as Haringey council has approved parking restrictions from 16 March for fixture days.

From 8am until an hour after a game finishes, drivers will be banned from entering a handful of streets around the ground at White Hart Lane.