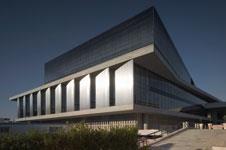 The new Acropolis Museum opened in Athens over the weekend amid further controversy. The €130m (£113m) building by Bernard Tschumi has space reserved for the Elgin Marbles and at the opening of the museum Greek prime minister Costas Karamanlis called again for the UK to return the 2,500-year-old sculptures, which were taken from the Parthenon’s frieze 200 years ago. If you weren’t able to make it to Athens over the weekend, this video shows the museum’s interior and exhibits coming together.

The 210,000ft² structure has provoked a clash between neo-classicists and modernists similar to that surrounding the development of Chelsea Barracks. Action group Acropolis Now accused the government of “architectural vandalism” by putting such a modern building only 280m from the Parthenon.

Tschumi has said in the building’s defense: “I’m not interested in imitating the Parthenon. I’m interested in achieving that level of perfection in my buildings, and for early 21st-century architecture to match it in its own way.”