Waste of energy? The search for display energy certificates 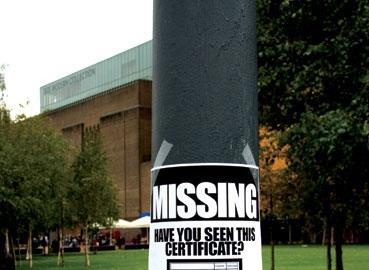 The government spent £10m promoting the launch of display energy certificates last week. Michael Willoughby searched in vain for anyone who took a blind bit of notice

1 October 2008. The day that buildings are supposed to put up fridge-style posters to declare how much energy they are consuming. These certificates display a rating of between A and G, and from today all public buildings larger than 1,000m2 must have one in a prominent place – and if they haven’t got one by January they risk a fine of up to £1,000.

But just how many London buildings have shown their cards so far? I’ve decided to step out into the energy-guzzling unknown of the South Bank and see if I can track down any display energy certificates (DECs) myself.

It feels appropriate to begin my hunt at the Tate Modern – a former power station. Now one of the country’s most popular art galleries, it has one of the largest exhibition areas you are likely to find. Will the Tate admit to just how much energy it takes to keep the Turbine Hall toasty?

I locate the customer services guy and sweetly ask to see his energy certificate. He is flummoxed. Sceptical of my explanation about the new law, he confirms its veracity on Google, then leaves a message with the building services manager, Tony. After an interminable wait there is no sign of Tony and I feel my energy levels beginning to flag. I depart, realising this won’t be easy.

My next stop, just metres eastwards, is Shakespeare’s Globe theatre. Built using 16th-century construction techniques, this building would certainly be an interesting study in energy usage. After a brief survey of the walls, I ask the girl at the desk to see her energy certificate, feeling a bit of a saddo beneath my public service mission. She puts out a call on the Globe walkie-talkie to Brenda, the duty manager. I wait a while, counting the number of Shakespeare plays with “Henry” in the title, but mercifully she arrives before I finish.

Brenda comes armed with an explanation. Apparently the Globe has recently changed facilities manager and the new man in charge was appalled at the energy usage of the lights. There has been much ado about sorting it out, she says, but with work needed on the thatch roof, too, he has probably been too busy. She is sure he has heard about this legislation, but just hasn’t got around to implementing it. Or if he has, he didn’t tell Brenda. As I walk along towards London Bridge, I have a sinking feeling. Are there any DECs out there at all?

Even though places of worship are exempt from DEC regulation (to ask why would be a metaphysical question too far), I nonetheless pop into Southwark cathedral. After all, energy efficiency is an ethical matter. I search through the church notices and leaflets, but, predictably, there’s no DEC to be seen. “I don’t know why it’s so hot in here,” an elderly woman says to her husband, tugging at her collar. At least someone’s aware of energy use.

There is no certificate in London Bridge hospital either. Do private clinics qualify as public buildings?

I know the tube and the railways get public money – Boris just asked the government for a £1.4bn bail-out. As rush hour kicks off, I plunge down the steps into the tube and ask a bored station assistant if she has a display energy certificate.

I smile and explain (charmingly) that all public buildings must now display the amount of energy they consume.

Perhaps better luck above ground. I head to the mainline station and gaze around. Both here and in the tube, it’s hard to see where a certificate might be mounted without using up crucial advertising space. No doubt health and safety documents can be found in the office, but that’s not a public display.

The information desk is closed, so I make my way to the ticket barriers, with a pessimistic feeling about how this will play out. The ticket barrier man is amused by my question and, somewhat encouragingly, slightly embarrassed that he is breaking the law. “You should ask the information people,” he says, before I explain that they are not on duty. “Perhaps it’s a bit technical,” he adds. It wasn’t meant to be, I think, sadly. It was meant to be simple. Like on a fridge.

The government is expected to roll out DECs to private buildings in the next few years. It claims it spent £10m promoting the scheme, through advertising and direct communication, but has still been accused of not doing enough to ensure it works, with shortages of qualified DEC assessors and glitches in the computer software among the complaints. And if my journey along the river so far is anything to go by, it hasn’t done enough to get the message across, either.

My dispassionate mask of reportage slips further in front on Guy’s hospital. It looks like the least cared-for building in London. I enter the barely-planned reception space and cast my eye around the stained walls. I find nothing. I go to the glass-walled reception booth and ask the same old question for the hundredth time. “You’ll have to ask information,” the receptionist says. Of course. I am beginning to get tetchy. “It’s meant to be clearly visible in the reception,” I tell her. She presses the button on the microphone in front of her to reply with no discernible rise in the volume of her voice. “I suggest you put that in the suggestion box.”

I turn on my heel and storm out. I haven’t seem a display energy certificate today that I haven’t printed out myself.

How hungry are our buildings?