Decision on final go-ahead due later this year

Wates has been appointed to a £21m deal for one of the first phases of a major regeneration scheme in York.

The contractor has been chosen to lead on a residential-led project that is part of the Castle Gateway regeneration masterplan. 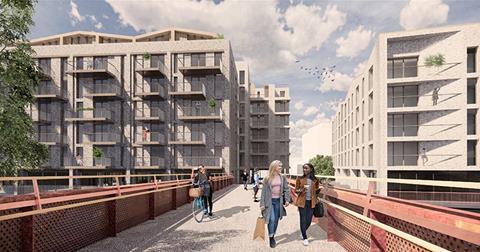 The work will include a bridge over the river Foss

The deal will see the firm work up a detailed tender for the BDP-designed Castle Mills scheme, which received planning permission in December last year – 12 months after plans were first lodged.

York council will make a decision in October on whether to proceed with construction based on Wates’ tender price.

Nigel Ayre, the authority’s executive member for finance and performance, said: “It is important that the Castle Mills development delivers value for money. Wates will produce a tender cost for the project, which will then be reviewed by the council’s executive in October. A decision will then be made on whether to progress the project.”

Assuming the scheme is given the go-ahead, Wates will build 106 new apartments, a riverside public park, a pocket park, commercial space and a new pedestrian and cycle route including a bridge over the river Foss.

The council said money generated from the sale of the apartments would help pay for a larger part of the public benefits and infrastructure of the wider masterplan.