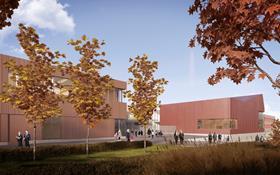 Proposals for a new secondary school in south London that will be built by Wates have been submitted for planning.

Architect Sheppard Robson has drawn up the 1,680-place scheme called Coombe Wood in Croydon, which will be part of the Folio Education academy trust, which is based in nearby Wallington and runs Wallington county grammar in Sutton.

The school will be built in South Croydon and cost £30m, running across 12,400m2. The proposal for the scheme was submitted to the council back in October 2016 and was given the green light by the department for education earlier this year.

The sports facilities include a full-size 3G pitch and athletics track, with a number of the amenities and the new five-court sports pavilion open to the public.

The school is expected to open in phases has been arranged as three, connected classroom ‘fingers’ that allow the building to respond to the site’s contours.

The job is being carried out under the Education and Skill Funding Agency’s contractor framework with other members of the team including structural engineer AKS Ward and M&E consultant CSD.