All five websites which had been using inaccurate fire ratings to sell an insulation product blamed for contributing to the Grenfell Tower fire have removed the information.

The UK-based websites were found to be selling Kingspan’s K15 insulation with outdated brochures and datasheets after an investigation by Building. 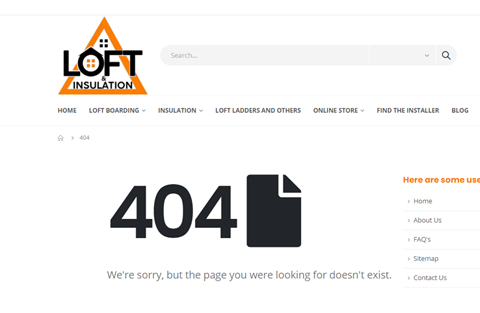 One of the five webistes, Loft and Insulation, has removed the web page which had been selling Kingspan’s K15 insulation with the outdated fire rating

K15, a combustible phenolic foam board, was found to be included in the cladding system of Grenfell tower after the fire which claimed 72 lives in June 2017.

The first phase of the inquiry into the disaster found the insulation products installed as part of the building’s flawed refurbishment “more likely than not” contributed to the rapid spread of flames up the sides of the tower.

One website, Insulation Superstore, had been selling the product using a decade-old brochure which claimed the insulation was safe to use on buildings above 18m despite this being in breach of fire regulations since 2019.

The website said after correcting the mistake that it was reviewing its processes “so that this oversight is not repeated”.

Another website, Building Materials, described K15 as achieving the outdated Class 0 fire rating and linked customers to an out-of-date brochure from September 2019.

Its managing director Philip Lidgerton issued an “unreserved” apology for the mistake and said customers who had purchased the insulation while the inaccurate information was displayed had been contacted and advised on the discrepancy.

A third website, Just Insulation, has also edited its description of K15 on its website which said it had achieved a Class 0 rating.

The website’s owner Darroch Moon said last week that the use of the rating was a “mistake on my part”.

Meanwhile Roofing Outlet has removed an out-of-date brochure from 2017 which gave the product a Class 0 rating, while Loft and Insulation has deleted the page selling the product.

Kingspan told Building it was “concerned to hear that outdated K15 literature with incorrect information is still being hosted on third-party websites”.

It added that it will recommend best practice for third parties which sell its products but warned that “unfortunately this is outside of our direct control”.

Up-to-date brochures for K15 state that the fire rating of the product is in fact Euroclass C-s2 d0. For an insulation product to achieve a Class 0 rating, it must be rated at least Euroclass B or above.

The Class 0 rating is itself outdated and has not been included in the government’s fire regulations since 2019. All materials included in a cladding system for buildings above 18m must now be Euroclass A, the rating for non-combustible.

The Grenfell Inquiry has already heard that Kingspan was able to claim K15 achieved Class 0 because of a loophole in Approved Document B of the building regulations in England and Wales which stated that this rating could be met if the surface of a composite product achieved Class 0 under testing.

Tests of the whole K15 product, not just the foil facer, carried out by Kingspan prior to the Grenfell Tower fire failed to achieve Class 0 and the latest brochures for the product no longer describe K15 as achieving Class 0.

In October last year, Kingspan withdrew a 2005 British Research Establishment test report of K15 after admitting the product it had been selling on the market for nearly 15 years was different to what had been tested.

When this newer version of K15 was tested in 2007, it turned the test rig into a “raging inferno” and had to be extinguished by the Building Research Establishment out of fears that it would endanger the testing laboratory, according to evidence heard at the Grenfell Inquiry.

The Class 0 rating was formerly used in the UK as the minimum standard for materials to be used above 18m but has since been dismissed as unreliable and has not been included in the building regulations since 2019.